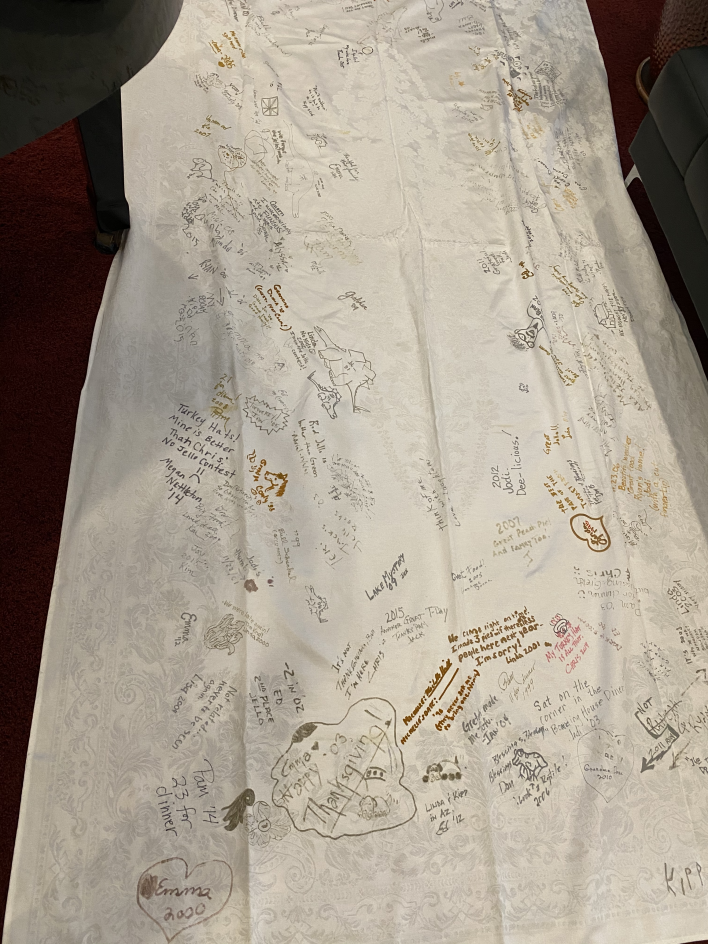 Come the holidays, I feed a lot of people.

I have five sisters, they went out and got five husbands, the begatting began, those kiddos grew up and brought home new people, and soon we needed a valet to park the cars for a family dinner.

I order two birds and a breast, set up a turkey roaster on the mudroom bench, and buy so many pounds of potatoes that the grocery bagger helps me schlep them to the car. I move the buffet out of the dining room, tie up the chandelier so it doesn’t bonk people on the head, and scour the house for every available chair. My grandmother’s table takes five leaves and seats 12 if I tuck a piano bench under each end but that’s not the half of us, so I had folding legs screwed onto wooden doors and, voila! More tables.

Back in the day, four matching white brocade tablecloths were a budget strain, so I hit a discount store for polyester. Cheesy-looking, but I figured I’d use them once a year and they’d be nearly invisible under dishes and food. Instead, they are closely inspected annually, have turned into family heirlooms, and are my near-constant companions.

Inspired by lord-knows-what, that first year of the Big Dinner I set permanent markers on the tables and told everyone to sign in, right on the tablecloth. It took some coaxing, but over the years, they have warmed to the task. I now possess four intricately inscribed tapestries covered with a history of signatures, sketches, and complaints, looping scrawls colliding with middle-school printing and goofy cartoons.

There is time travel, right there in the inkstains. Little baby handprints turn into middle school drawings and mature into college signatures. An enormous scribble by my infant niece is next door to the name of her fiancé after they became engaged. My grandson is registered there before he was born, my daughter-in-law drawing an arrow toward where her pregnant stomach pushed against the table. My father, gone two years now, still shows up for dinner in his drawings of a horse (a classic entertainment he drew for his daughters when we were children) and turkey (what he was usually eating at the time). All the girlfriends my son brought home, the names changing annually and requiring the subterfuge of strategically placed butter dishes and centerpieces when the next girl appeared, linger in perpetuity.

Then, a catastrophe. As I set the big table with the blue-and-white china and the long table with the china painted with red roses and the extra table with the gold-edged plates, I noticed that markers are actually not so permanent. Names were fading. I decided to preserve them in needlework. But not having been raised in an 18th-century drawing room, first, I had to teach myself to embroider.

My first efforts made bumpy tabletop terrain that toppled water glasses, but eventually, I figured out how to put needle to thread. Corner by corner, all along the edges, winter to winter, I moved the stretching hoop and threaded the needle to trace what people wrote for more than twenty years. Embroidering, I discovered little notes and sentiments that I had missed in the bustle. A circled wine stain with a written confession by the perpetrator. “Dateless again,” from my sister, years ago. The year I experimented serving squash bisque: “No soup for me!” The year my son was diagnosed with MS: “It was great in 2008…sorta.” Strays with no family in town came to dinner one year and stayed with us in handwriting forever. I embroidered a lengthy quote from some person named Stacy, whom no one remembers inviting to anything.

Last year was the last year. I downsized and moved to smaller digs. The Big Dinner cannot fit in my small dining room. My daughter has the table, my son took the wine cabinet, and my seven-year-old grandson asked for my dessert plates. His mother raised one eyebrow, but he got them.

The tablecloths are still with me, too gigantic for any table I now own. Most nights, I take one out to work on while I watch a movie or Skype with the kids.

For the first year in a long, long time, no new names will be added this holiday season.

This article was originally published in Milwaukee Magazine