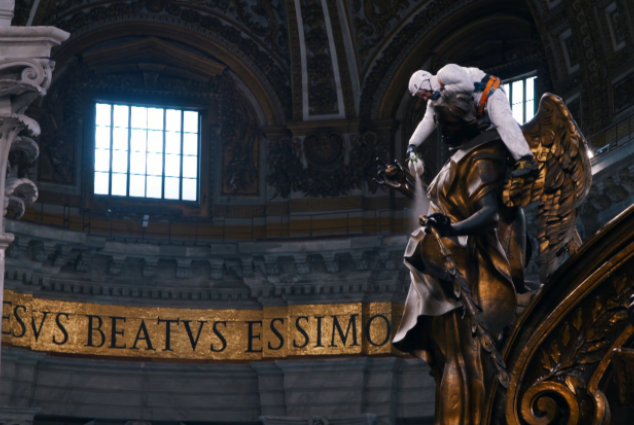 ‘Inside the Vatican’ premieres Tuesday, April 28 on PBS

Next week, PBS releases a new documentary of the Vatican offering tantalizing peeks into spaces no tourist can access and revealing the everyday work life for some of the 2,600 people working in the independent city-state.

Filmed during Pope Francis’s fifth year, “Inside the Vatican” is loosely structured around the church calendar and important events: Easter, a papal visit to Ireland, installing new cardinals, preparing for Christmas. It feels a bit like three documentaries: one of workers and who make the Vatican run, one of the clerical leadership, and a closing—and hopeful— section on the sex scandals inside the church.

It’s an espresso-tinged steep in Italian culture (The sculptures! The paintings! The cardinals’ exquisite tailoring!) with many delightful, humanizing moments, like when Archbishop Paul Gallagher, the Holy See’s secretary for relations with states, pops open his boombox and admits he plays Abba at night.

Cameras follow workers on their daily rounds, traveling through miles of tunnels, tiny back rooms, and labyrinthine hallways that impart of a sense of being on a cruise ship belowdecks.

We see office workers praying in hallways over their lunch hour, nuns making sandwiches for the homeless, and gardeners clipping hedges into shapes that echo the curve of the great dome of St. Peter’s Basilica. Trash collectors discuss the implementation of the new-to-the-Vatican practice of recycling, a pet project of a pope who weighs in publicly on climate change.

The religious history is palpable. The Sanpietirini, for example, are craftsmen who clean and maintain the marble and statuary of St. Peter’s Basilica. Hiked by a cherry picker to the dizzying heights of St. Peter’s dome, they strap into safety harnesses and clamber over, under, around, and through the cluster of cherubs on the Bernini baldacchino over the altar, dusting and polishing angelic buttocks and biceps. There’s a startling intimacy about being the only humans able to touch that beauty, and the Sanpietirini speak of what they do with humility and awe.

We see baritone Mark Spyropoulos in choir practice for his Easter solo. The Easter Vigil ceremony begins in darkness, and then a flame is passed, candle-to-candle, offering “a glimpse of the transcendent,” says Spyropoulos.

Gardeners bundle olive branches and gather palm fronds for the 80,000 visitors attending the outdoor Easter service. The Vatican Police Force Gendarmerie lets the camera follow as they check trash bins for bombs and storm drains for trespassers. They admit that Pope Francis’s tendency to plunge into crowds to shake hands and allow the faithful to snap selfies presents some challenges.

As he has done since he was a young priest, Pope Francis visits a nearby prison to wash the feet of inmates. There is tremendous dignity on both sides: the tattooed men in chairs, watching in disbelief as the head of the Catholic Church kneels at their feet and washes and kisses them. It is a haunting moment.

Anne-Julie Kerhuel, the Vatican secretariat of state, takes us through the employee entrance and points out an image of the “Virgin of Silence” placed there by order of the pope—no idle gossip at work! She describes the Vatican employee culture as impressively, quintessentially multicultural—not Italian!—and every scene of Vatican visitors, audiences, and dignitaries is highly diverse.

There’s a Vatican social media team—oh, yes there is—and we sit in on a strategy meeting of what seems to be an American crew working out keen approaches to the Pope’s Twitter feed (@Pontifex) and Instagram (@Franciscus).

Among the international journalists covering the Vatican is British writer Christopher Lamb, who shares his impressions of how Pope Francis’s progressive thinking on divorce, homosexuality, and social justice around the globe is received by Vatican leadership. Lamb characterizes the pope as believing that the church should be in dialogue with the world, and delivers the most ringing line about Pope Francis in the documentary: “He’s not a liberal. He’s not a conservative. He’s a radical.”

Well-known religious conservative Benjamin Harnwell provides critique. Harnwell, whom Steve Bannon calls “the smartest guy in Rome” (according to Harnwell’s website), founded conservative think tank the Dignitatis Humanae Institute and is not a Francis fan. Harnwell criticizes the pope for trying to position himself on the side of the people, as if he exists outside the establishment, but argues that as the pope, Francis is the establishment.

Pope Francis eschews living in the luxurious ten-room papal apartments in the Apostolic Palace and instead occupies two rooms in the Casa Santa Marta, a guest house for visiting clergy. He encourages migrants and the homeless to shelter along one side of the palace, and cardinals pick their way around sleeping bags and piles of clothing.

There’s also a fascinating behind-the-scenes view of how cardinals get dressed. Pope Francis intentionally scours developing nations for new cardinals, elevating clergy from modest communities and remote villages and promoting the idea of cardinals as pastors rather than power brokers. As part of their Cinderella transformation, they must meet with the official Vatican tailor to have cassocks and hats fitted in a charming scene that includes a note of slight dismay from a tailor who wishes the pope would have his vestments made of fancier fabric.

As the pope addresses the cardinals a week before Christmas, he tells them that clergy cannot “behave like a group of privileged people who think they have God in their pockets.” Some shift uncomfortably in their chairs (is it the scarlet silk or the message?).

The documentary concludes with an exploration of how Pope Francis is addressing the sex scandals in the church. His 2018 visit to Ireland came just as a grand jury report was released in Philadelphia detailing the sexual abuse of 1,000 children by more than 300 priests over 70 years. About this, the pope is frank. He appointed Jesuit Father Hans Zollner, a psychologist and leading expert on sexual abuse, to lead educational and preventive efforts in the church. There is no choice, both argue, but to face this and deal with it directly. There’s hope in that.

This article was originally published on U.S Catholic